by Tony Chan
SHARE THIS
Taking a huge leap forward, Microsoft launched the latest version of the Windows Operation System – Windows 8. The new operating system radically changes the way Windows works by introducing a new shell and user interface designed to be used with touchscreens yet maintaining certain compatibility for mouse and keyboard users. It takes Windows into the world of touch and low-power devices, giving people unified experience on personal computers, laptops, tablets, and even mobile phones.
Windows 8 comes in four editions: Windows 8, Windows 8 Pro, Windows 8 Enterprise for intel-based PCs and Windows RT for ARM-based tablets like the Microsoft Surface.
Comparison chart of different editions of Windows 8:
New features in Windows 8
As Windows 8 Enterprise Version is included in the campus license, we will focus on the new features of Windows 8 Enterprise Version only.
1. Start Screen
A new and redesigned user interface is optimized for touchscreens as well as mice and keyboards. Multi-touch as well as gesture recognitions are supported on touchscreens. It will be the first screen shown at startup. It replaces the Start menu of previous versions of Windows. Users can open apps, websites, contacts, and folders on the Start Screen, or just glance at the tiles of the Start Screen to get the latest news, real-time updates, and info. 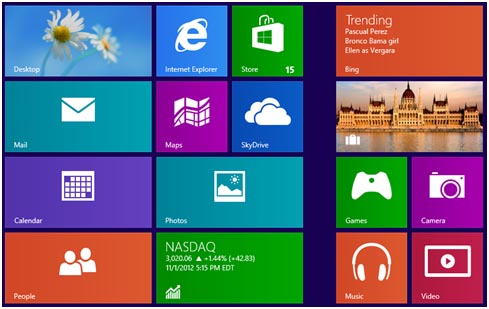 4. Windows To Go
Windows To Go is a new feature for enterprise users of Windows 8 that enables users to boot a full version of Windows from external USB drives on host PCs. It is designed for enterprise usage and targets scenarios such as continuance of operations, contractors, managed free seating, travelling workers, and work from home and so on.

6. Hyper-V
Microsoft has replaced its previous virtualization solution with a more powerful, scalable, and capable solution called Hyper-V in Windows 8. Hyper-V is based on its server-based virtualization technologies, giving a more compatible and integrated solution to users. XP Mode based on the old Windows Virtual PC technology is no longer supported in Windows 8.