Upgrading www6: The Infrastructure Side

In the last issue of Network Computing, the upgrading of www6 has been described in view of the application side (Ref: Upgrading www6: The Application Side). In this article, we shall look at the infrastructure aspects of the upgrade. In July 2011, the www6 system (front-end and back-end components) had gone through major hardware upgrades with new servers, storage and infrastructure, to improve the web hosting service of www6 to take up more hosting services. The service was further enhanced with the latest software technology (such as IIS 7.5 on Windows Server 2008 R2 and MS SQL Server 2008 R2 Clustering) to ensure compatibility, reliability, security and performance.

Below is a diagram depicting the www6 System Architecture. 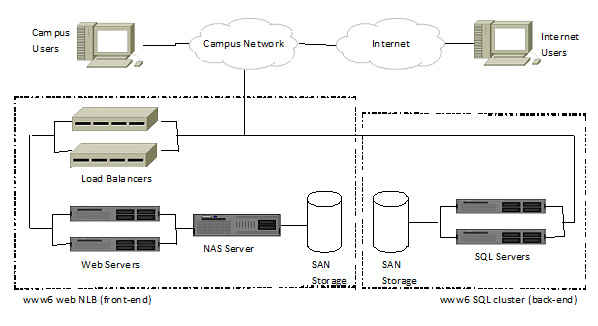 Following are the highlights of the upgraded hardware:

(1) Functionality - New features are added or enhanced with the latest software versions used in the new environment. For example:

(2) Performance - Servers, storage and infrastructure are upgraded to new high-end models with higher capacities and better system configurations. For example, the web servers are upgraded from 32-bit servers with 2xDual-Core CPU and 4GB RAM to 64-bit servers with 2xQuad-Core CPU and 8GB RAM. The upgrade allows more data loaded and more user requests to be processed simultaneously.

(3) Security - Windows Server 2008 R2 and MS SQL Server 2008 R2 provide a more secure central web hosting and SQL database environment respectively. Besides, web application isolation can be achieved by restricting an application to access its resources such as application pool, directory and files.

(4) Reliability - Redundancies using network load balancers for web servers (in front-end) and the MS SQL Cluster (in back-end) were set up to eliminate single points of failure so as to improve the availability and reliability of the service.