Current State of the Campus Network

The University’s data network (CTNET – City University Campus Network) has undergone several major upgrades since its creation in 1985.  Each major upgrade represents the adoption of the latest state-of-the-art networking technologies and standards.  The network has evolved from circuit switching to Ethernet, Extended Ethernet, FDDI, ATM, Gigabit Ethernet, and eventually to 10 Gigabit Ethernet as of today.  The CTNET became a converged network (a single network that moved both voice and data simultaneously versus running separate circuit-based and IP-based networks) in 2002, when Gigabit Ethernet was deployed throughout the network.  The last network upgrade was performed in 2007-2008 with the incorporation of 10G Ethernet.  The current network has sufficient capacity in meeting users’ bandwidth demands at least for the next 2 to 3 years. 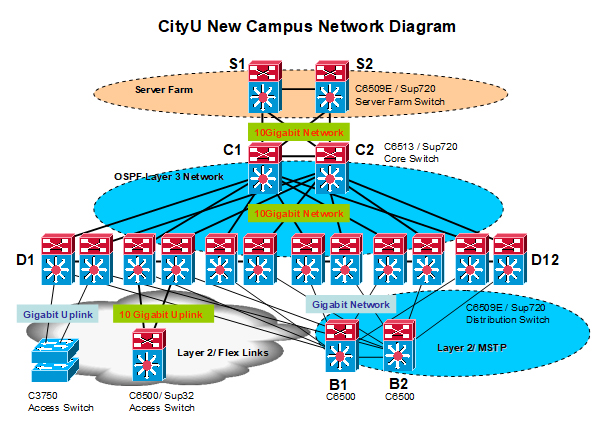 The CTNET is built based on a three-tier hierarchical architecture, which comprises the Core Layer, the Distribution Layer and the Access Layer.
The 10G Ethernet Backbone of the CTNET is composed of a pair of Layer-3 switches at the Core Layer together with over half-a-dozen pairs of Layer-2/3 switches at the Distribution Layer.  The core switches and each pair of distribution switches are interconnected in a meshed topology using 10G Ethernet links for full path redundancy. Each pair of switches at the Distribution Layer is further connected to a number of Layer-2 switches (located inside the various wiring closets distributed over the campus buildings) at the Access Layer, forming a Distribution Group.  Normally intra-group network traffic is confined within the same Distribution Group while inter-group and off-campus network traffic is exchanged at the Layer-3 core switches.  For each Distribution Group, redundant links exist between each access switch and the pair of distribution switches.
Apart from the Layer3 core layer, a small Layer-2 core layer is built for the purpose of linking up a department’s network which spans across the distribution groups.  The existence of the Layer-2 core is undesirable for its being a potential threat to network stability, but it is necessary because a typical department may have staff offices located at separate zones, buildings or remote sites.

Networks for the New Buildings and Remote Sites

The CTNET has been extended from the main campus to a number of remote sites over the years.  These sites include:

As such, all the network services provisioned at the main campus such as the Internet, IP phone and wireless LAN, etc. are also available to users at the remote sites.

The coming new buildings such as the Academic 2 Building and Academic 3 Building, as well as the Student Residence Phase 4 will also have direct optical fibre connections to the main campus.

Much effort and time have been spent in extending the network from the main campus to the remote sites in the recent 2-3 years, resulting in far less effort and time being put in fine-tuning the network for optimal performance and stability, as well as keeping abreast of the new networking technologies.  Since data communication links (leased Ethernet circuits) are expensive, the remote sites relying on using leased Ethernet service for connection with the network at main campus do not have the luxury of having backup links and sufficiently large spare bandwidth.  Therefore, as the number of remote sites increases, the overall resiliency of the network degrades accordingly.  Hopefully, the number of these remote sites will drop after the completion of the new buildings.  Also if the University can come up with a better policy for space allocation (e.g. to avoid allocating space in separate zones/buildings/sites to the same department), then the Layer-2 core can be retired.

Since network upgrade is a never ending process, it is about time to plan for the next major network upgrade, which may occur in 2 to 3 years from now.  The current hierarchical network design may become outdated by then, as network vendors are talking about flat networks and borderless networks nowadays.  Cloud Computing, Green IT and Virtualization has changed the requirements on the data centre networks, and the existing networking equipment inside the Computer Room may require an upgrade earlier than the other parts of the network.