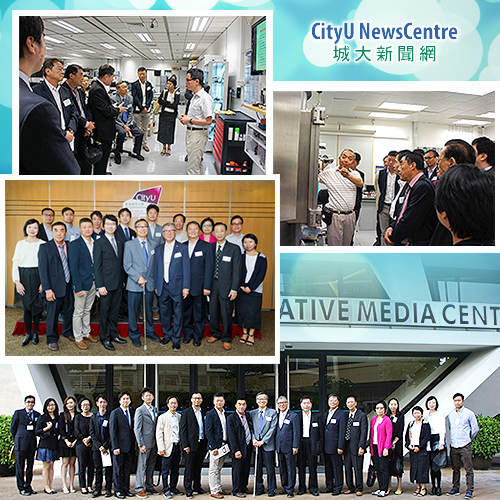 A delegation of 18 members from Hong Kong Optical Manufacturers Association (HKOMA), led by Mr David Chow Tak-fung, Chairman of HKOMA and Member of the Board of Governors of City University of Hong Kong Foundation (CityU Foundation), visited CityU on 20 October. The delegation received an update on the development of the University and visited Plasma Laboratory, Centre for Smart Energy Conversion and Utilization Research, the “Pure Land—Inside the Mogao Grottoes at Dunhuang” exhibition, and learnt about the “bionic eyes” system developed by CityU faculty.

Professor Matthew Lee Kwok-on, Vice-President (Development and External Relations), briefed the delegation on the history and latest development of the University during lunch. Professor Lee indicated that CityU had made rapid advancement in a short span of time. According to the 2015 world university rankings published by Quacquarelli Symonds (QS), CityU has been ranked 57th in the world.