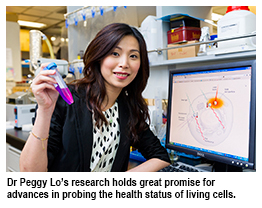 A young faculty member in the Department of Biology and Chemistry (BCH) at City University of Hong Kong (CityU) has contributed to the development of a novel nano-thermometer for probing the health status of living cells, leading to the publication of a co-authored article in the highly prestigious international journal Nature in collaboration with researchers from Harvard University.
Dr Peggy Lo Pik-kwan, Assistant Professor in BCH, carried out some of the research reported in the August issue of Nature at CityU. The new approach reported in the journal held great promise for medical diagnostics and public health, especially in the broad area of monitoring cell development in people with diseases such as cancer, she said. 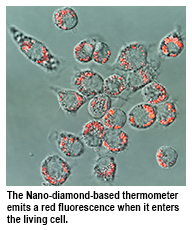 “Other methods for measuring temperature variation in cells lack sensitivity,” said Dr Lo, who has a PhD from McGill University and did her post-doctoral work at Harvard. “Our method is highly sensitive and can detect temperature variations as small as 1.8 millikelvin, or less than two-thousandth of a Celcius degree, the lowest ever reported [in a living cell].”
Dr Lo and her Harvard collaborators work in the area of nano-biology where diamond crystals/nano-diamonds are used as nano-devices for taking extremely precise temperature measurements within the cellular environment. 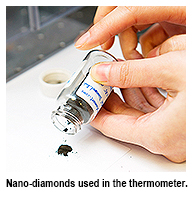 By measuring the temperature gradients in living cells, researchers can see what transformations, growth or patterns of behaviour are taking place. In particular, a thermometer capable for detecting an infinitely small change in thermal energy over a large range of temperatures within a living system could provide a powerful new tool in many areas of biological and biomedical research, the researchers said.
“I am lucky to have the opportunity to participate in the project with a group of extremely talented chemists, physicists, and biologists at Harvard led by my post-doctoral advisor. And I am also grateful to CityU for helping me to kick start my research here so quickly,” said Dr Lo, who joined CityU last year.
“The next step is to look into how we can use this nano-tool to measure temperature variation in cells to correlate and predict the onset of diseases,” she added.