City University of Hong Kong (CityU) has named the sports centre after Mr Hu Fa Kuang, founder of Ryoden Development, as the Hu Fa Kuang Sports Centre. The naming ceremony, in appreciation of his significant contributions to sports development and support of the University, was held on 19 January.

Mr Hu is a renowned sports advocate in Hong Kong and on the mainland. He has dedicated himself to promoting a sporting culture and has made a notable contribution to a wide range of sports and associations. Mr Hu said he was excited by the great improvements Hong Kong athletes made during last month’s 2009 East Asian Games. 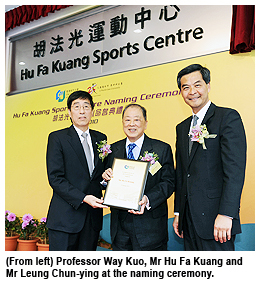 A keen sportsman himself, Mr Hu was impressed with the performance of CityU’s sports teams, which won the overall championship titles in both the men’s and women’s divisions of the 2009 University Sports Federation of Hong Kong competition. This was the first time a tertiary institution had received both the overall men’s and women’s titles in two consecutive years, and the fourth time CityU had won both overall titles in the same year. Eight athletes were named as the most valuable players. On the other hand, the men’s badminton team shattered records after being crowned champion for 13 consecutive years.

“Apart from CityU’s excellent academic and research achievements, I also understand that it has 29 successful sports teams participating in both local and regional competition,” said Mr Hu. “I hope my support to CityU will encourage more staff, students and alumni to participate in sports and focus on their health.”

Speaking at the ceremony, The Hon Leung Chun-ying, Chairman of CityU Council, said Mr Hu’s donation was a gracious gift that would also benefit the University’s strategic development.

“CityU has gained international recognition for its professional education and research excellence. Our students, alumni and staff continue to perform well locally, regionally and internationally, and every University community member is proud of the outstanding achievements made by the sports teams,” Mr Leung said. 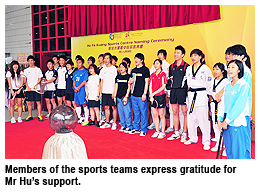 Thanking Mr Hu for his generous support, Professor Way Kuo, University President, said it was a great honour for CityU to have the sports centre named after Mr Hu.

“Mr Hu’s contribution to sports has a profound impact on the sports development in Hong Kong. His support to CityU will help the University achieve its goals set out in the new five-year Strategic Plan, i.e. to become a leading global university in the Asia-Pacific region,” Professor Kuo said.

At the end of the ceremony, representatives from the sports teams presented a specially-made card to Mr Hu to express their gratitude for his support.