A rigorous curriculum is a hallmark of the Department of Physics. The goal of our teaching is to equip students with knowledge and critical thinking skills that will enable them to tackle difficult problems throughout their career, and in their life. Our curriculum teaches not only foundational courses in physics, but also technology driven courses such as computer modeling and advanced instrumentation.

Our curriculum is internationally benchmarked. It has allowed our students to enrol in joint degree programs with top universities in the world, such as Columbia University in the USA, to obtain degrees from both universities. 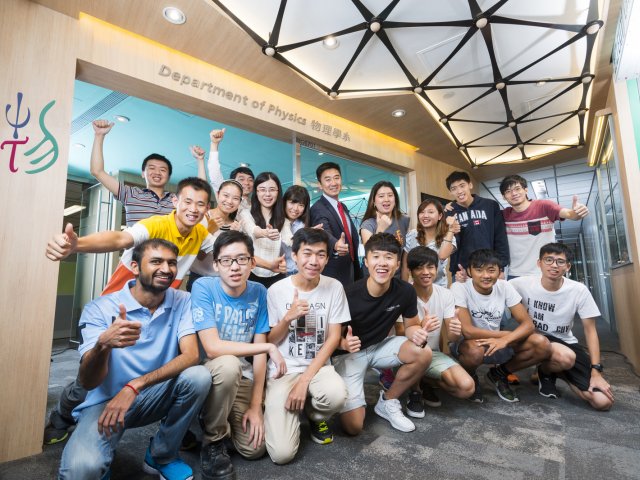 "The Department of Physics aspires to become a leading physics department in the Asia-Pacific region."

Faculty members at the Department of Physics are committed to excellence in research. The department’s research focuses on the following themes:

Our focus reflects the growing trend of physics research today.  In a recent editorial, the editors of Physical Review Letters remarked, “today’s physics research is much more about interwoven disciplines—physics with chemistry, biology, materials science, and others.”

Read more about us

To celebrate the new establishment of Department of Physics, an inaugural logo was designed on the basis of Dr. Sunny Xin Wang’s interpretation of the Traditional Chinese character of “PHYSICS” – 物.

Tau (Τ, τ), the 19th letter of the Greek alphabet, is typically used in Physics to represent various kinds of time (e.g. electron travel time between collisions in Drude model, imaginary time in for Matsubara Green’s function, dimensionless time for the usual theory practice, some kind of broadening in scattering problems etc.). Psi and Tau signify the core subject of Modern Physics.

勿, the Chinese character, traditionally means a knife and using a knife to dismember a cow, yet, it also carries the meaning of “analyzing according to its nature/character”.

On the other hand, it looks like a person. The presence of human being has substantial meaning in Quantum Physics. When we observe a state, we change the state forever. One of the foremost Physicists of the 20th century, Niels Bohr, has this famous saying:

"For a parallel to the lesson of atomic theory..., we must in fact turn to … that kind of epistemological problems with which already thinkers like Buddha and Lao Tzu have been confronted, when trying to harmonize our position as spectators and actors in the great drama of existence.”

It signifies the relationship between science and humanity, which may reflect in different ways for various people.

Join the Department of Physics at CityU

We are always looking for talents. If you think you are good fit, please check our CityU e-Recruitment System to see our open positions!