Online reservation of CREATE! service is unavailable (except 3D Printing). Please contact our staff at the IT Help Desk for assistance upon your arrival. In order to maintain a safe and pleasant environment, the CREATE! room can accommodate a maximum of 4 persons at a time only. Hence, we may allow the core user who made the reservation for entrance only.

The aim of the Books & City Series is to encourage students’ polymathic study, to gather knowledge, not only by expanding beyond the borders of countries, but also time and different subjects. Speakers like writers, journalist and faculty from academic departments are invited to share with students. Through this event, we hope to promote reading from the perspective of speakers from various fields as well as to promote library resources.

Prof. Kwan Tze-wan, Professor of the Department of Philosophy and the Founding Director of Archive for Phenomenology & Contemporary Philosophy and Research Centre for Humanities Computing at CUHK, was invited to introduce his team’s award-winning “Multi-Function Chinese Character Database” (http://humanum.arts.cuhk.edu.hk/Lexis/lexi-mf/) on 20 Mar 2015. The database is developed based on the online version of Lin Yutang's Chinese-English Dictionary of Modern Usage and the Chinese Character Database: With Word-formations Phonologically Disambiguated according to the Cantonese Dialect. It is also made up of major functions such as Archaic Chinese Script Forms, Etymological Accounts, English-Chinese Lookup, etc. This database is developed with the hope of providing further support for the development of contemporary Chinese language education. Prof. Kwan introduced various functions of the database and demonstrated how to do searching. The talk was facilitated by Dr. Fan Ka-wai of the Department of Chinese and History. 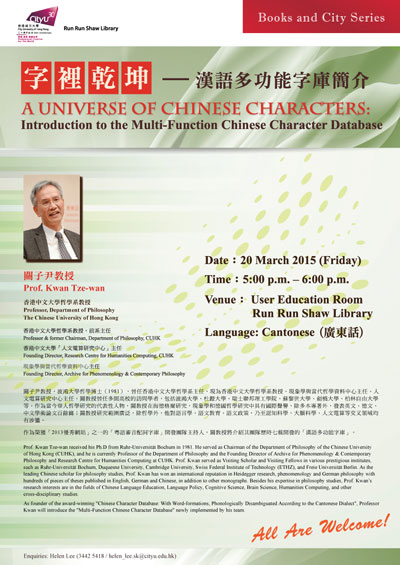