Prof. Wen-Xiong Wang entered Xiamen University (at age 15) to study Marine Biology and received his BSc and MSc in Marine Biology in 1984 and 1987, respectively. He went to study in the Plymouth Marine Laboratory in England in early 1989 as a Research Student (on Scholarship). Two years later, he moved to the State University of New York at Stony Brook (USA) to study for his PhD (on Scholarship). In 1996, he obtained his PhD degree in Coastal Oceanography and after a short stay at Stony Brook as a postdoctoral researcher, he joined the Hong Kong University of Science and Technology as an Assistant Professor in late 1997. In 2003, he was promoted to Associate Professor, Full Professor in 2007, and Chair Professor in 2014. He joined City University of Hong Kong in 2020 as a Chair Professor.

Prof. Wang has authored >460 peer-reviewed publications on subjects related to metal ecotoxicology and biogeochemistry. His lab has trained numerous graduate students, postdoctorals and visiting scholars (~100). He is the corresponding or first author for the majority of his publications. He is one of the Editors of Environmental Toxicology and Chemistry , and the Associate Editor of Environmental Pollution, and serves on the editorial boards of many other international journals. His work is widely cited (>20,000 times), with a current H-index of 75 (Google Scholar). He received the prestigious Overseas Distinguished Young Scientist Award from the Chinese National Science Foundation in 2002, the Biwako Prize for Ecology in Japan in 2003 for his work on metals in aquatic systems, the Changjiang Chair Professorship in 2006, the First Prize in Natural Science from the Ministry of Education in China in 2009 for his work on the trophic transfer of metals, and the First Prize in Environmental Protection Science and Technology from the Ministry of Environmental Protection in 2016. He is an Elected Fellow of the Institute of Marine Engineering, Science and Technology 'FIMarEST' (UK-based), and an Elected Fellow of the Society for Environmental Toxicology and Chemistry (SETAC).

More recently, we are interested in developing the state-of-the-art bioimaging technologies enabling the direct visualizations of metals and their speciation at the subcellular/cellular levels. Most of these works currently focus on the nanoparticles in model organisms. 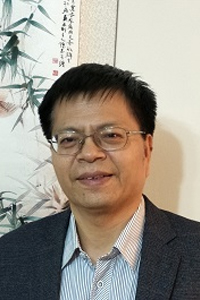