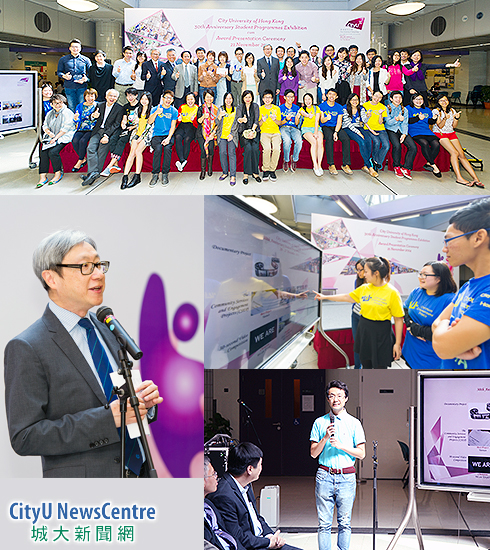 Community-oriented projects and short videos about university life devised by students from City University of Hong Kong (CityU) received awards at a ceremony that kicked off the 30th Anniversary Student Programmes Exhibition on 21 November.

The student projects were part of two major initiatives aimed at celebrating CityU’s anniversary year: the Community Services and Engagement Projects (CSEPs) and the “Life at CityU in 30 Seconds” Video Competition.
The winning projects, as well as other student programmes, are on show at the 30th Anniversary Student Programmes exhibition in the Purple Zone from 21 to 30 November.
Professor Horace Ip Ho-shing, Vice-President (Student Affairs), delivered a welcome speech at the ceremony, and presented the awards with the help of Dr Raymond Chan Kwok-hong, Dean of Students, and Dr Joe He Zhou, Associate Head of the Department of Media and Communication.
Altogether four CSEPs awards were presented: the Best Project and three Excellent Project awards. CSEPs comprised 30 community projects covering Hong Kong and other places like Yunnan, Cambodia, and Myanmar in which students provided voluntary services such as English education, life-skills training, and art workshops, among others.
Two student teams respectively from the School of Creative Media and the Department of Media and Communication, won the “Life at CityU in 30 Seconds” Video Competition and there was one runner-up from the School of Creative Media. The winning short videos showcased CityU’s professional facilities and the dynamic student life.
In addition to CSEPs and the video competition, student programmes at the exhibition include the Humanity Talk Series, Global Marathon – Gyeongju Cherry Marathon 2014, CityU Delegation – Standard Chartered Hong Kong Marathon 2014, and the 30th Anniversary Joint Concert.
Visitors are welcome to view the exhibition until 30 November where they can share fond memories about the 30th anniversary year celebrations with participants.