A recent graduate from the School of Creative Media at City University of Hong Kong (CityU) has kicked off her career in the creative media industry with a job on the movie Men Suddenly in Black 2.

The School of Creative Media maintains a close relationship with creative industries in the region and helps students identify opportunities where they can exhibit their talent.

Heiward Mak Hei-yan, a graduate of the Bachelor of Arts (Honours) in Creative Media, was offered this golden opportunity thanks to Mr Patrick Tam Ka-ming, Assistant Professor in the School of Creative Media and a veteran filmmaker. He advised Heiward on her graduation project, a short film entitled Lovers’ Lover, and he was so impressed that he recommended her for Men Suddenly in Black 2.

Heiward is gifted at story-telling and her work hits audiences in the heart, according to Mr Tam, who praised her familiarity with the filmmaking process, her self-discipline and concentration.

At first, Heiward helped shoot “The Making of” special and cast extras, but by chance the actor Mr Eric Tsang Chi-wai, who was the producer, read some scripts that Heiward had written for the casting. He was so impressed he made her one of the film’s scriptwriters.

During production, Heiward said she was amazed by the last-minute changes, the constant exchange of ideas and the search for perfection. “To achieve the best effect, we would amend the script constantly, sometimes making changes just before the cameras started to roll!” she said.

This whole experience was an eye-opener for Heiward. She witnessed the commitment of each member of the production crew and realized that every single position in the team was vital to the overall success of the production.

Before attending CityU, Heiward had planned to become a graphic designer. After obtaining a diploma in design, she hoped to develop her talent in the School of Creative Media, the perfect home for her interests. 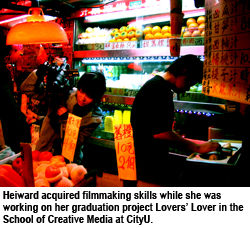 The opportunities at CityU were inspiring, Heiward said. Apart from her own graduation project, she also took part in inter-departmental projects such as producing a documentary for the Department of Biology and Chemistry about students who had been to Malaysia on a study tour. These experiences allowed Heiward to apply what she had learnt in class.

Heiward said that SCM encouraged students to reach out, think more and hone their skills, noting that her achievements were due to hard work on her courses, such as those for scriptwriting and documentary filmmaking. She loved the atmosphere in class where classmates would share opinions, and she learnt about cinematic story-telling and how to cooperate with different production units. In addition, media theory strengthened her powers of observation, she said.

Heiward enjoys working in this free and ever-changing industry, one she believes has no boundaries and makes everyone feel young at heart. And she has the self-belief that she will succeed in her future career.