Looking into the future: The 18th Congregation

Every graduation ceremony honours an end to years of study and hard work. For the 6,024 students who received their degrees, diplomas and certificates at CityU's 18th Congregation, it also marked the beginning of fresh challenges. 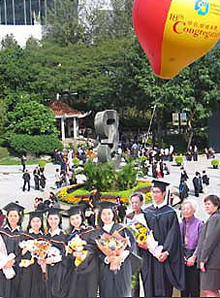 Among the 5,200, or so, graduates who attended the 18th Congregation, more than 50 were from the first group of 84 graduates of CityU's Master of Business Administration programme, developed in collaboration with Shanghai Jiao Tong University in 2001. They came from across the mainland, including and Shenzhen.

"Most of the MBA programmes offered by mainland universities are more theory-oriented and their teaching material is dated," said Mr Mao Yiping, one of the mainland MBA graduates and Director and CEO of Shanghai Intnet Information Technology Co Ltd. "I've learned so much from my CityU professors who imbued us with knowledge based on issues in the real world," he added. 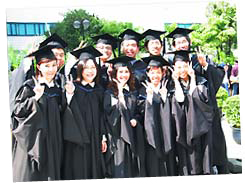 Among the mainland guests in attendance was Professor Zhang Junsheng, former Deputy Director of the New China News Agency (Hong Kong Branch), who was in from 1985 to 1998. Upon his return to this month, he received an Honorary Doctor of Science from CityU for his important contributions to the development of university education in mainland , where he merged four universities in and established the new Zhejiang University. Now Chancellor of Zhejiang University, Professor Zhang believes that an outstanding university should be comprehensive, research-oriented and innovative.

Speaking on behalf of the graduates, Ms Lynda Zhou, a Department of Economics and Finance graduate, reminded her classmates and schoolmates that adversity can make people stronger. "I think difficult times force us to think deeply about what we can learn from the past and what we can do in the future... I'm learning to appreciate the positive side of things, rather than complaining about the down side," she said. 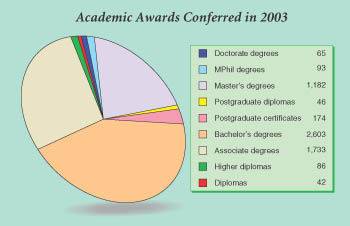 In this, Zhao echoed the President's address in which Professor H K Chang took the late US President John F Kennedy's words to heart, advising the students to "'Ask not what the country can do for you; ask what you can do for your country.' While each of you strives for your personal career, potential exists for a bright future for our country and , which, in turn, brings rich rewards, both spiritual and material," Professor Chang said.