Professor S T Lee, Chair Professor in the Department of Physics and Director of the Centre of Super-Diamond and Advanced Films, was awarded the Second Prize in the National Natural Science Award 2002 in recognition of his outstanding contributions to diamond and nano-technology research, and in particular his research project on the nucleation and growth of diamond and new carbon materials. 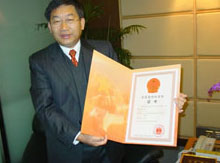 Professor Johnny Chan, Associate Dean of the Faculty of Science and Engineering and Chair Professor in the Department of Physics and Materials Science, was appointed Guest Research Professor at the South China Sea Institute of Oceanology of the Chinese Academy of Sciences.

Professor G G Wang, Chair Professor of Chinese and Comparative Law in the School of Law , was appointed Distinguished Professor of Law by the Hunan Normal University . Professor Wang was also selected to serve as a member of the Political Consultative Committee of Hebei Province

Professor Benjamin T'sou, Director of the Language Information Sciences Research Centre, has been appointed a Member of the Independent Police Complaints Council for a team of two years, with effect from 1 January 2003 .