What’s Blackboard health check and why?

Blackboard (Bb) is adopted by the university as the standard platform for e-Learning and e-Portal. It is widely used by all CityU members for teaching, learning, announcements, wiki and blog, as well as making use of its single sign on feature to access AIMS, Booking Systems and other Departmental Services. To ensure the 24x7 availability of this mission critical service, more than ten application specific appliances and servers (Load Balancer, Application Server, Database Server, and File Server) of various powers (see diagram 1) have been put together. These equipments are adequately sized to support the demand, allowing margin for usage growth between hardware upgrades and occasional burst usages. Its availability is guaranteed by load balancing and redundancy, 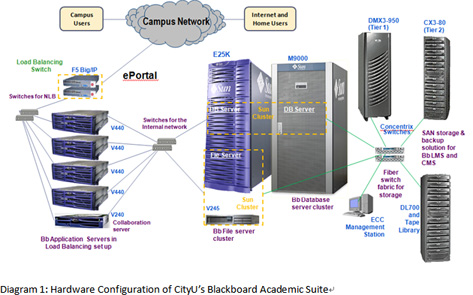 Each Bb application component is closely monitored, and regular calibration and gauging amongst components are necessary to ensure the overall throughput, avoid bottleneck and anticipate usage growth. This is done via the annual Bb health check which the university has been engaged since 2007 i.e. a year after the full adoption of Bb as the standard platform.

The health check is carried out by the vendor’s engineer who, being the expert of the Bb system, knows the internals and has rich experience in recommending and assessing Bb in educational and commercial deployments. A health check may include a system hardware and software audit, traffic analysis and usage modeling, performance profiling and tuning recommendations, depending on the needs of the institution.

The First Health Check in March 2007

During the first health check in 2007, our Bb usage pattern in the past year was consolidated and used as the baseline model. With the baseline model, double and triple loads were simulated to stress test the system to identify performance weak points and bottlenecks. In this exercise, the database server was found to be the bottleneck where remedies were done before real usage stretches out the system.

The Second Health Check in March 2008

The findings in the first health check were useful and in anticipation for Blackboard version upgrade and hardware upgrade (see Issue 55 of the Network Computing for details), a health check was scheduled a month after the upgrades which showed a system-wide performance gain, especially the database servers which used to be the bottleneck (see diagrams 2, 3 and 4). This also indicated the hardware capacity will be able to sustain normal usage growth for a few years before the next major replacement. 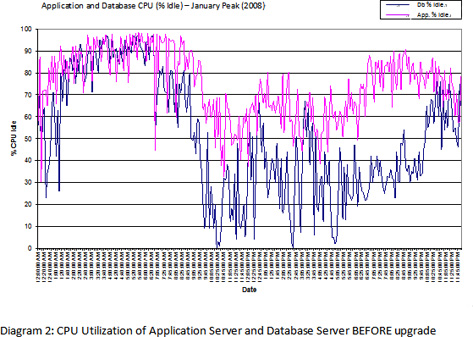 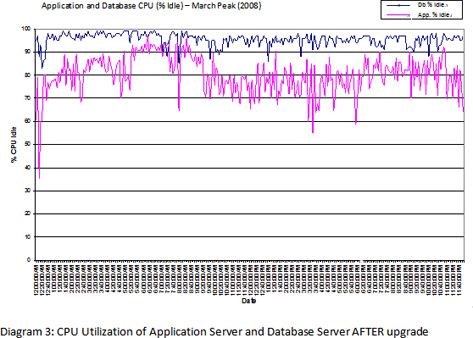 The Third Health Check in March 2009

Following the major hardware upgrade and elaborate health check in 2008, the Bb system had subsequently been upgraded from Release 7 Service Pack 3 (7.3.216.0) to Release 8 Service Pack 4 (8.0.375.0). The recent health check was done in March 2009 which focused on gauging the performance of core functions and assessing system configuration. To do so, the Bb engineer collected archived data including error log, anonymous access log, system resources usage records, configurable parameter files from the Computing Services Centre (CSC), analyzed and correlated those data to produce the needed results. The results concluded that our Bb environment had been optimally configured, being properly maintained and was performing exceptionally well. Its usage has grown constantly over the past 3 years. Monday remains the busiest day of the week while Saturday is the least. Daily access peaks are 1:00 p.m. to 2:00 p.m. and 11:00 p.m. to midnight. The average hits per session has increased from 70 in 2007 to 90 this year, the average duration of a user section has escalated from 500 seconds to 700 seconds, and user concurrency has risen from 43 to 50. These numbers seem abstract but they collectively mean that there are more users logged on to Blackboard at the same time, they are staying in the system for a longer period and are using more tools and accessing more content. Yet, they are happy with the performance of the system.

During every health check exercise, the project team comprising staff from the Education Development Office and the CSC had worked closely with Bb engineers. This allow the team to follow the technological development of the product closely and better plan our implementation and support strategy for this 24x7 system and partnering systems.