The PBX (Public Branch Exchange) phone system that we are currently using is over 18 years old and has already reached its end-of-life cycle. There is a great potential risk of system breakdown due to hardware failure which may impact the majority of the university community. It is therefore necessary to replace the PBX system as soon as possible.

Voice over IP (VoIP) is a digital technology that allows voice and video calls to be conducted over a public or private IP network using a combination of computers and IP phones at both ends (as opposed to the PBX phone system using analogue technology to carry voice-only calls over a public or private telephone network using a combination of telephones and fax machines at both ends). Through the appropriate digital gateway, the digital IP telephony (IPT) System is able to communicate seamlessly with an analogue PBX phone systems over the analogue telephone network and vice versa.

Based on the VoIP technologies, the IPT system not only allows voice, data and video to share the same network cable (hence reducing cabling and support cost), but also offers many features normally not found or cannot be implemented under the conventional PBX system such as broadcast or targeted delivery of digital news in voice, text and/or images. As such, the university has decided to gradually phase out the existing PBX system and adopt the IPT technologies in all new buildings and offices.

The CityU IP Phone project started in 2002 by replacing in Festival Walk Office (FW) 300 phone lines subscribed from the commercial phone service provider with IP phones and installing 450 new IP phones in Phase I of the Student Hostel. In the Fall of 2003, another 140 phones in student rooms of Jockey Club House and To Yuen Building were upgraded to IP phones. Since 2004, the coverage of IPT has been gradually extending to new staff offices, public phones, and Phase II of the Student Residence. Up to now, we have more than 3200 IP phones installed in the Student Residence, and 1500 IP phones in Main Campus and remote offices.

The IPT system is composed of a Cisco Unified Communications Manager Cluster, a Unity Voice Mail System, Voice Gateways and IP phone sets inter-connected through Cisco routers and switches. The IPT core equipments and core network are built with full redundancy and highest priority is given to voice traffic to ensure best quality and reliability. The following picture depicts the architecture of the IPT on the campus network and its linkage with the existing PBX system : 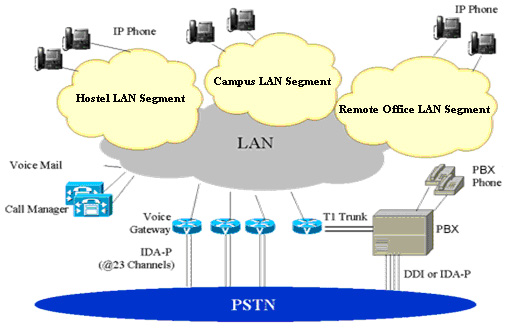 Features and Advantages of IP Phones

In addition to the basic phone features, one can enjoy more sophisticated functions and advantages in the IPT system that are not available in the conventional phone system. Below lists some of the features and advantages of the IPT.

As the IPT has been proven to be reliable and versatile, CityU is planning to migrate all the existing 4,000 analog devices in the main campus such as phones, fax, etc. on the PBX to the IPT in the near future.

The CSC will contact each department individually for the schedule and details of the migration. It is expected that the migration will be completed within 1 year.

New Cisco IP phone sets will be provided to users to replace the old analog phones in the migration. For legacy devices and machines that must run on PBX system (e.g. fax, personal alarm system, etc.), specially designed voice gateways are used to enabling them to run on the IPT system transparently.

To minimize impact on the phone service during migration, special arrangement in setting up an inter-trunk to link up the PBX and IPT systems is made. As a result, a user on either phone system can make call by just dialing the recipient’s 4-digit extension number regardless of which phone system the recipient’s phone number actually belongs to. In addition, a 3-month call forward service or playing an announcement to inform the caller of your new phone number will be provided by default.

If you want to know more about the migration, please contact the CSC Help Desk.